Your preference has been updated for this session. To permanently change your account setting, go to My Account
As a reminder, you can update you preferred country or language anytime in My Account
Email a Friend!

Your email is being processed.

Save 15% on This Item
Ends: November 3 2021 at 10:00 AM PT. Discount applied in cart. May not be combined with other discounts.
Brands A-Z Life Extension
Categories Supplements Fish Oil & Omegas (EPA DHA) Krill Oil 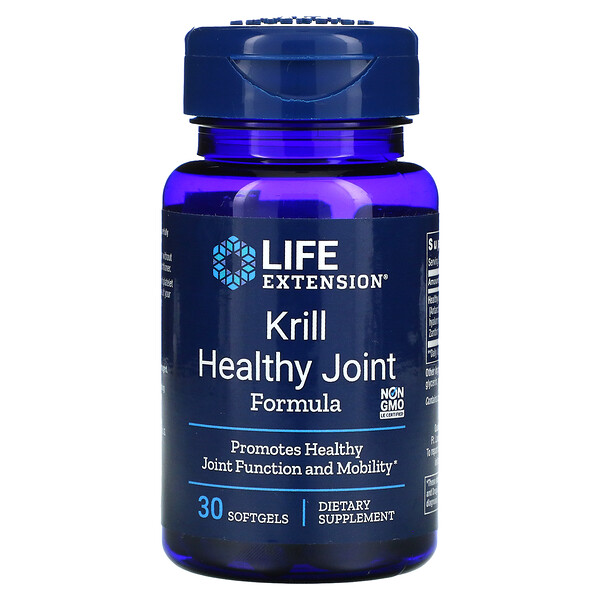 This unique formula combines krill oil, hyaluronic acid, and the super-antioxidant astaxanthin to promote joint comfort and range of motion. Omega-3s are good for your heart, but the fatty acids found in krill oil are particularly effective for joint health. In a clinical trial, over 100 older individuals taking Krill Healthy Joint Formula once a day experienced a 55% reduction in joint discomfort in less than three months. And 63% of them maintained ease of motion. Take Krill Healthy Joint Formula alone or with other joint health supplements!

Benefits at a Glance

Hyaluronic acid occurs naturally in the joints, where it acts to lubricate and cushion against repeated physical impacts. Because it forms a major component of cartilage and soft tissue, it is widely used to promote joint health. The difficulty has been that hyaluronic acid is a large molecule that is not well absorbed by the body. But when combined with phospholipids like those found in krill oil, it has been shown to reach significantly higher levels in the bloodstream than in standalone form, as shown in an animal study.

Krill oil is a natural source of the antioxidant carotenoid astaxanthin. Astaxanthin works in multiple ways, including suppression of free radical activity, inhibiting inflammatory factors, and enhanced mitochondrial function. It also maintains krill oil’s molecular stability. Most commercially available krill oils do not contain significant amounts of astaxanthin as it is nearly eliminated during processing. Krill Healthy Joint Formula is fortified with astaxanthin for maximum stability and superior benefit.

Read the entire label and follow the directions carefully prior to use.

Take one (1) softgel daily with or without food, or as recommended by a healthcare practitioner.

If you are taking anticoagulant or antiplatelet medications, or have a bleeding disorder, consult your healthcare provider before taking this product.

While iHerb strives to ensure the accuracy of its product images and information, some manufacturing changes to packaging and/or ingredients may be pending update on our site. Although items may occasionally ship with alternate packaging, freshness is always guaranteed. We recommend that you read labels, warnings and directions of all products before use and not rely solely on the information provided by iHerb.