Liquid Chlorophyll Is Trending In Skincare Right Now—Here's Why 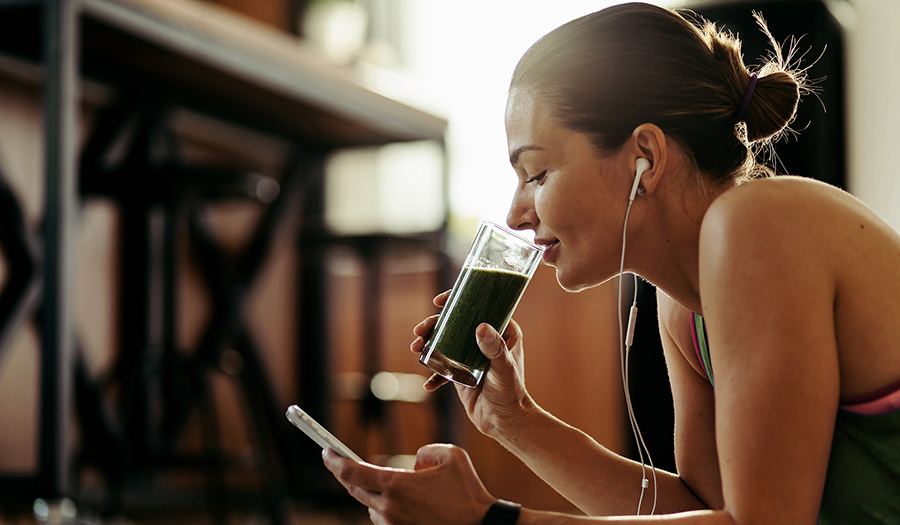 Chlorophyll as a dietary supplement is promoted for its ability to promote internal cleansing and detoxification. And since there is a strong link between gut health and healthy, radiant-looking skin, chlorophyll has become a popular “beauty from within” dietary supplement with lots of incredible testimonials. Recent social media posts have created increased awareness of the benefits of chlorophyll in promoting skin health.

‌‌‌‌Are There Different Types Of Chlorophyll?

The basic structure of chlorophyll is similar to that of the heme molecule in hemoglobin, which is the oxygen-carrying protein in our red blood cells. The central atom in chlorophyll is magnesium instead of iron in heme.

‌‌‌‌What Is Chlorophyll Used For?

Water-soluble chlorophyll (chlorophyllin) exerts a number of beneficial effects with most of these effects occurring within the gastrointestinal tract since it is poorly absorbed.1 There is a popular axiom related to the benefits of chlorophyll and green foods, “When you are green inside, you are clean inside.”

Chlorophyll is often used to help control body, fecal, and urinary odor. It may also help to reduce odor related to halitosis (bad breath). The beneficial effect is largely due to chlorophyll’s internal cleansing and astringent qualities (the ability to attract water). It may also favorably influence the microbiome and reduce the formation of odorous compounds. In constipated individuals, chlorophyll promotes regularity.2,3

A. Chlorophyllin tablets at a dose of 40 mg, three times per day.

B. Filgrastim (a.k.a., Neupogen or Leucogen) tablets at the dosage of 20 mg, three times per day.

All the subjects were treated for 1 month. The change in the white blood cell count (WBCC) showed that patients treated with water-soluble chlorophyll significantly increased the WBC. The treatment proved to be markedly effective in 34 cases, effective in 17, and ineffective in 9, the total effective rate being 85%, which was significantly higher than that in the placebo group (26.7%) and similar to that in the filgrastim (83.3%). No adverse reaction was found with the chlorophyllin treatment.6

Filgrastim is produced by a genetically modified organism to mimic a compound in the body, granulocyte colony-stimulating factor (G-CSF), that promotes white blood cell production. Apparently, chlorophyllin produces a similar result though the mechanism of action is not known yet. This implies that water-soluble chlorophyll should be researched more fully given its significantly lower cost, greater safety, and lack of side effects. Filgrastim is on the World Health Organization's List of Essential Medicines. Perhaps chlorophyll will make it to that list someday.

Chlorophyll has become a popular “beauty from within” dietary supplement based upon many positive testimonials. It may be helpful indirectly by promoting intestinal cleansing, but it may also produce some direct effects on the skin as well. Topical preparations of a gel containing sodium copper chlorophyllin have shown it to produce positive clinical results in pilot studies in people with acne-prone skin with enlarged pores; people with rosacea and facial redness; and women with photodamaged facial skin.7-9 Whether internal ingestion of chlorophyll produces similar benefits has not been determined in clinical studies, but it is certainly possible.

‌‌‌‌What Is The Typical Dosage Of Chlorophyll?

Water-soluble chlorophyll is available in both liquid form and solid form (capsules and tablets). The typical dosage is 100 mg of chlorophyllin one to three times daily.

No side effects or adverse drug reactions are known. It is a strong pigment, so drinking liquid preparations may turn the tongue very dark. Consumption of water-soluble chlorophyll may also produce very dark stools.

Discover the health benefits of liquid chlorophyll. From improved skin and immunity to decreased body odor, chlorophyll has many ways to improve your overall health.

Top 10 Sources of Omega-3: Which Is Right for You?

Omega fatty acids come from many different sources and have numerous health benefits. Learn about 10 sources of omega-3s from fish oil to algal oil.

Pectin is a soluble dietary fiber that is present in nearly all plants. Learn about its health benefits—from blood pressure support to detoxification.