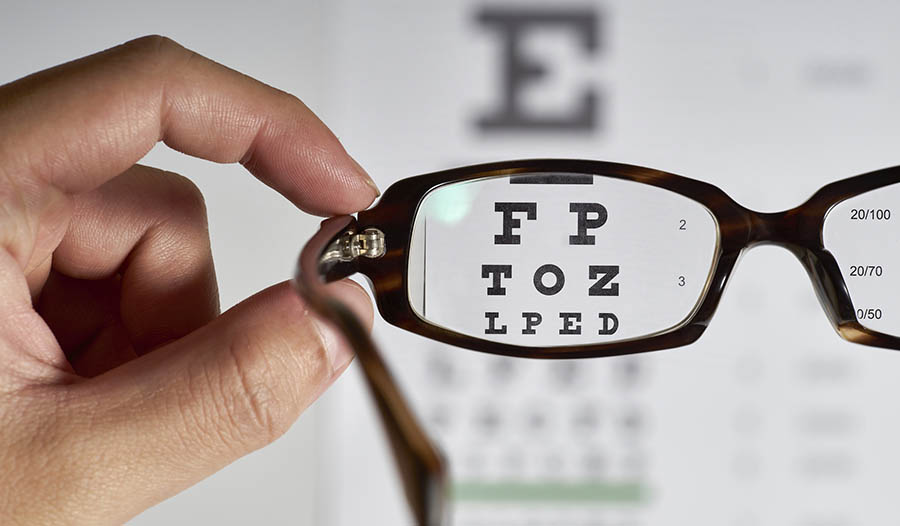 Of our five senses, vision the most cherished. Eye health is a very important component of our overall health. Healthy eyes not only affect how you see but also how you feel about your environment and those around you. It has been said, “The eyes are a window to the soul”. While I agree, I would also suggest “The eyes are a window to one’s overall health including heart health, brain health and happiness”.

Just like many other parts of one’s body, eye health is impacted by lifestyle, diet, and exercise. There are many known eye diseases and disorders that can often be managed by eye specialists, such as an optometrist or ophthalmologist.

Good nutrition plays a vital role in the prevention of many eye diseases. Consumption of a variety of fruits and vegetables, which have high antioxidants levels, is important. Eye conditions which benefit from a smart diet and scientifically studied nutrients include:

Macular degeneration is a medical condition that results when the center of the retina deteriorates. Over time, it leads to visual loss. Much research suggests that a healthy diet rich in antioxidants, minerals, and vitamins are important in the prevention of macular degeneration.

Carotenoids are a class of red, yellow and orange-colored foods that act as natural antioxidants in the human body. A popular carotenoid is beta-carotene. Beta-carotene is responsible for the orange color seen in carrots and pumpkins that are known to help maintain healthy vision.

It is important to note that beta-carotene must first be converted to vitamin A by the body in order to benefit from its natural antioxidant potency. Vitamin A supplements should only be taken under the guidance of a physician, especially if pregnant or a smoker.

Lutein and zeaxanthin are two common carotenoids associated with eye health. Numerous studies have shown benefit in preventing the progression of age-related macular degeneration when consumed through diet and when taken in supplement form. Green leafy vegetables, such as kale and spinach are rich in lutein and zeaxanthin. If these are not regularly eaten in your diet, then a supplement should be considered. Suggested dose: as directed on the label.

Zinc is an abundant mineral found in the human retina, it’s antioxidant properties are responsible for enzymatic reactions that are critical for retinal function. The eye has a high concentration of zinc when compared to other organs of the body.

In addition, some research claims that deficiency of zinc in the eye may cause poor night vision. Foods high in zinc include red meat, poultry, beans, nuts, and seafood. Zinc can be consumed as part of a multivitamin or as a supplement. Suggested dose: as directed on the label.

Vitamin C (ascorbic acid) is also found throughout the retina and studies have shown that low concentrations of vitamin C in the blood increase one’s risk for macular degeneration and cataract formation. A 2017 study in Diseases looked at vitamin C and found that those who had a diet high in vitamin C had a significantly reduced risk of developing various eye diseases such as macular degeneration. Suggested dose: 500-2,000 mg daily.

Bilberry is a phytonutrient that also contains flavonoids beneficial for vision and blood supply to the retina. Flavonoids are also naturally found in berries, green tea, chocolate, red wine, and citrus fruits. Bilberry can also be taken as a supplement. Suggested dose: as directed on the label.

Other supplements that may be beneficial include Ginkgo biloba, N-acetyl cysteine, and Melatonin.

As we age, the optic nerve, which connects the eye to the brain can become damaged due to a “pressure” build up in the eye, this is known as glaucoma. Those with advanced glaucoma may first lose peripheral vision and if left untreated, can lead to blindness. According to American Optometric Association, glaucoma is the second-leading cause of blindness in the United States.

Common treatments for glaucoma typically include prescription eye drops or surgery. Integrative practitioners have also turned to flavonoids for its antioxidant, anti-inflammatory and neuroprotective properties to help prevent glaucoma.

Antioxidants are helpful in glaucoma prevention and treatment. A 2018 study in Acta Ophthalmology showed that antioxidants increased blood flow to the retina, which is beneficial for patients with glaucoma.

In addition, a 2015 study concluded that anti-oxidants, specifically flavonoids, may be helpful in improving vision in patients with glaucoma although it did not lower the eye pressures specifically.

Ginkgo biloba has been studied extensively in China, Germany, and France for its flavonoid compounds. Multiple studies support that Ginkgo Biloba increases circulation to the optic nerve. A study conducted in 2012 looked at Ginkgo biloba and found that it helps reduce oxidative stress, improve ocular blood flow and prevent the progression of glaucoma. Suggested dose: as directed on the label.

It has been shown that a diet high in antioxidants is important and beneficial for eye health. Oxidative stress is a major factor contributing to the development of eye diseases and aging, in general. Multiple studies have demonstrated that antioxidants help prevent and minimize oxidative damage to cells and nerves of the eye. Vitamin C and Vitamin E are antioxidants which can be helpful. A 2012 study showed that consumption of fruits and vegetables rich in Vitamin A and Vitamin C reduced the risk of developing glaucoma.

Vitamin C plays an important role in helping to lower eye pressure, a symptom of glaucoma. A 2017 study showed those with lower vitamin C levels had increased risk for glaucoma. Suggested dose: 500 – 2,000 mg per day.

Vitamin E has also been found to have beneficial effects only when consumed with appropriate amounts of other antioxidants. A 2002 study reports that 1,193 people were given vitamin E supplements daily and over a 4-year period but there were no significant benefits found from taking vitamin E alone. Therefore, it is important to consume a balanced diet with a variety of fruits and vegetables in order to ensure the intake of different vitamins and minerals for optimal eye health.

A cataract is formed over time due to the lens of the eye becoming cloudy. If left untreated, it can lead to blindness. Scientists believe oxidation of the lens is the main reason this occurs. Excessive sun exposure, tobacco use, diabetes, high blood pressure, and certain medications, like steroids, are risk factors for developing cataracts.

Antioxidants can help protect against the formation of cataracts. A diet high in fruits and vegetables that contains numerous anti-oxidants is beneficial. Many herbs, vitamins, and minerals in foods and supplements have antioxidant properties that help protect the eyes.

Lutein and zeaxanthin are two common carotenoids associated with optimal eye health. A study published in Molecules in 2017 showed that lutein and zeaxanthin have antioxidant and blue light filtration properties that can improve vision. The antioxidants were found to prevent cataracts by preventing damage to the lens of the eye. The Molecules Journal reported that people who took 6-10 mg per day of lutein, reduced their chance of cataract surgery by 20-50%.

However, most research suggests that combining both lutein and zeaxanthin provides the most benefit. Leafy green vegetables and fruits are good sources of lutein and zeaxanthin. When not adequately consumed in one’s diet, a quality supplement should be taken. Suggested dose: as directed on the label

Pine Bark Extract – Pine bark extract was originally used by indigenous people of North America and Asia as a medicinal herb. A 2017 animal study by Dr. J. Kim showed that pine bark extract could prevent the formation of cataracts. Suggested dose: 50 to 250 mg once or twice per day.

Spirulina - Spirulina is considered a superfood by many. It is an easily digestible nutritional supplement, which belongs to a family of blue-green algae and can be taken in a pill or powder form. Spirulina comes from a type of bacteria scientists call cyanobacterium. Studies from 2013 and 2014 show that spirulina can help prevent cataracts from developing. Suggested dose: as directed on the label.

Vitamin C- A potent antioxidant that protects against cellular damage. A 2014 study in Ophthalmology demonstrated those with high blood levels of vitamin C were less likely to have cataracts. Other studies have shown similar findings. Suggested dose: 500 to 2,000 mg per day.

Multivitamins - Multivitamins contain a variety of nutrients, including vitamin E and vitamin C. A 2014 study in Nutrients showed those who took a multivitamin were 34% less likely to develop cataracts. Suggested dose: as directed on the label.

Diabetes, when not controlled, can cause damage to the eye. Doctors call this damage, diabetic retinopathy. This complication, if untreated,  can cause permanent vision loss. Obviously, controlling type 2 diabetes or reversing it using diet and lifestyle changes is crucial to keep one’s eyes healthy.

A 2012 study in Evidence-Based Complementary and Alternative Medicine journal studied Lycium barbarum, the active ingredient in Goji berries, on eye health. The study showed that this ingredient in Goji berries could protect the eyes from diabetes complications. The researchers concluded that this molecule may be helpful in diabetes-induced eye damage, a common cause of eye blindness.

A healthy diet rich in fruits and vegetables and regular exercise is also important in controlling diabetes and other common complications that so many with diabetes encounter.

Dry eyes (Sicca syndrome) results from decreased tear production and is a common reason a person visits their eye doctor. Sometimes, it can be due to autoimmune conditions such as Sjogren’s syndrome or rheumatoid arthritis. Those with diabetes are also at increased risk for dry eyes. Symptoms may include burning, itching and the sensation of something being in the eye.

Omega-3 fish oil - Evidence has shown that consuming anti-inflammatory omega 3 fatty acids improve the symptoms of dry eye syndrome. A 2013 study in Ophthalmology showed that the consumption of 180 mg EPA and 120 mg DHA twice daily improved overall dry eye symptoms. A 2016 study concluded that the oral consumption of omega 3 fatty acids “significantly improved” the signs and symptoms of dry eyes over a 12-week period in the double-blind placebo-controlled study. A 2014 study in Medical Science Monitor of 790 patients showed similar benefits. Omega-3 fatty acids can be found in fish, chia seeds, or in supplement form, such as omega-3 capsules or omega-3 liquid fish oil. Suggested dose: as directed on the label.

Vitamin C appears to also be helpful in those with dry eyes according to a 1980 study. Suggested dose: 1,000 mg per day.

Vitamin B6 may be helpful for dry eyes in those who are vitamin B6 deficient according to a study in Medical Hypotheses.

Lastly, smoking cigarettes causes many health problems. It accelerates the aging process and leads to various chronic illnesses that are frequently irreversible. The body becomes highly contaminated with these toxins that further accelerates the development of vision disorders and/or vision loss. Smoking cessation is crucial to eye health.

Further, while moderate sunlight exposure has health benefits such as vitamin D production, too much sun can cause damage to the eyes. It is important to always remember to protect the eyes from excessive damage from the sun. Wearing UV protected eyeglasses is advised when spending a lot of time in the sun.

Special thanks to Miriam Hernandez, BS for helping me conduct research this article.

A cataract is a progressive disorder that causes the lens of the eye to become cloudy. A doctor discusses foods and supplements that may help protect the eyes.

What Is Benfotiamine? Here Are Five Health Benefits

Good vision plays an important role in your functioning, mobility, and overall well-being.