These Herbs, Spices and Nuts Could Help with Diabetes Management 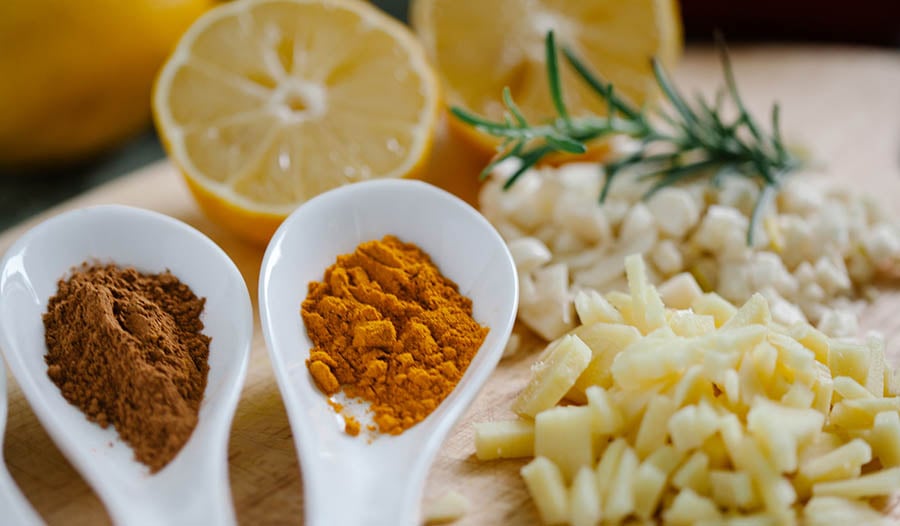 Worldwide, more than 422 million people have diabetes. The vast majority—90-95 percent— have type 2 diabetes, a condition primarily due to lifestyle factors, like consumption of excess sugar, and limited physical activity. Type 1 diabetes is not preventable and occurs when the immune system attacks the pancreas, preventing its ability to secrete insulin.

Uncontrolled diabetes can cause damage to the brain, nerves, tissues, eyes, heart, and kidneys. When blood sugar is chronically elevated, the walls of the arteries become damaged (endothelial dysfunction), leading to artery blockage, stroke, or heart attack. Diabetes also increases the risk of various cancers and Alzheimer’s disease, and it’s believed that elevated levels of insulin are the leading reason this occurs. Fasting and consuming a low carbohydrate diet, or keto diet, can be beneficial.

Medications are frequently prescribed by doctors to help lower blood sugar and prevent diabetic complications. Some with diabetes need to inject insulin when diet, lifestyle changes, and oral medications are not sufficient. However, some desire to take more natural approaches and prefer herbal alternatives, especially during the early stages. For those with type 2 diabetes, these can frequently be useful, but one should consult with their healthcare provider prior to adding anything new to their regimen.

Cinnamon is a common culinary spice used all over the world. Over the last decade, there has been renewed interest in cinnamon and its ability to help regulate blood sugar levels in both pre-diabetics and diabetics alike.

A 2013 study concluded, “The consumption of cinnamon is associated with a statistically significant decrease in levels of fasting plasma glucose, total cholesterol, LDL (bad cholesterol), and triglyceride levels, and an increase in HDL (good cholesterol) levels; however, no significant effect on hemoglobin A1c was found…”.

A 2016 meta-analysis study also showed some beneficial effects. In this study, patients continued to take their diabetes medications but also added cinnamon supplements. The researchers concluded that cinnamon supplements added to standard diabetic medications and other lifestyle therapies and had modest effects on lowering fasting blood sugar values and hemoglobin A1c. Suggested dose: As directed on the label.

An herb commonly used in Indian curry, fenugreek’s seeds have also traditionally been used to help lower sugar and inflammation. Recent studies show it can be helpful in lowering blood sugar and cholesterol. A 2015 study from Czechoslovakia showed fenugreek may be comparable to various prescription medications commonly used to treat diabetes.

A 2016 study in the Journal of Ethnopharmacology showed that fenugreek could significantly lower blood sugar levels when compared to a placebo pill. Suggested dose: As directed on the label.

This plant has been used since the days of antiquity to help lower blood sugar. A 2009 animal study showed bitter melon could help reduce insulin resistance, a common finding in diabetes. More recently, a 2015 study in Nutrition Journal showed its ability to lower blood sugar levels when taken at doses of 2,000 and 4,000 mg per day.  Suggested dose: As directed on the label.

Gamma linolenic acid is a fatty acid found in various seed oils such as evening primrose oil and borage oil. It can be applied topically to help with skin conditions like eczema or consumed as a capsule for other health concerns. While there is no evidence that it can help prevent diabetes, it may be helpful for those with diabetic neuropathy, a painful condition. A 1993 study in Diabetes Care showed that GLA, when taken for one year, could reduce symptoms of nerve damage due to diabetes. Suggested dose: As directed on the label.

Garlic is a popular herb grown all over the world. It has a distinctive smell and has been used for medicinal purposes for millennia. Shown to help reduce the risk of contracting the common cold,  lower blood pressure and even cholesterol, garlic appears to also be helpful for those with diabetes. A 2017 study in Food & Nutrition Research showed garlic supplementation could result in a significant reduction in glucose levels and hemoglobin A1C levels. Diet and exercise are also very important. Suggested dose: As directed on the label.

Bilberries contain powerful antioxidants known as anthocyanins, a type of flavonoid in flowers and fruits. Scientific studies suggest that anthocyanins can help lower blood sugar levels. A 2013 study in the Journal of Nutrition Science demonstrated that a bilberry extract supplement could reduce blood sugar levels and insulin levels in diabetics after a meal. A 2017 study also supported this evidence. Bilberry can be consumed as a food or as a supplement.

Making sure your blood sugar levels are controlled can take work and dedication. Ginseng can help, too—studies have shown that ginseng is beneficial in lowering blood sugar and has positive effects in diabetics or even those with prediabetes. There is evidence that ginseng root can also improve insulin production. A 2014 study concluded, “Ginseng modestly yet significantly improved fasting blood glucose in people with and without diabetes...” A 2018 study also showed ginseng’s benefit in lowering blood sugar.

It is still important to know that you should not discontinue any current medications you are taking unless advised by your physician. You should discuss with your primary care doctor if ginseng is right for you.

Almonds are the seeds of trees native to Mediterranean regions of the Middle East, and Southern Asia. Nowadays, the majority of the world’s almonds are produced in California, while Spain, Iran and Morocco produce about 14 percent of the world’s almonds. Almond seeds are a healthy snack with many benefits—almond milk, almond flour and almond butter have become popular food items over the last decade.

A 2011 study in Metabolism showed that those with diabetes who consumed almonds on a daily basis saw lower blood sugar levels compared to those who did not eat almonds. In addition, a 2017 study showed that regular consumption could help improve blood sugar control. Adding a serving or two of almonds to one’s daily routine is advised for both diabetics and non-diabetics alike.

Pistachios are related to cashews and have their origins in the Middle East and Southeast Asia. They are rich in antioxidants with many nutritional benefits. A 2015 study showed that diabetics who consumed pistachios regularly were less likely to experience heart attacks due to reduced risk factors, such as high cholesterol. The researchers concluded that diabetics should make healthy lifestyle choices, including daily consumption of pistachios. A 2017 study also showed their overall value in those with diabetes while a 2014 study showed pistachios could help lower of blood pressure in diabetics.

One of the most consumed beverages in the world, coffee has many health benefits. One benefit may be helping to prevent diabetes. This assertion is based on studies going back to 2006, which were confirmed by a 2013 study in the American Journal of Clinical Nutrition. Similarly, a 2014 study out of Europe concluded that coffee might significantly reduce the risk of developing type 2 diabetes. There is some evidence that coffee could pose risks for those who already have the condition, so consult your doctor before adding or increasing your intake of coffee if you are diabetic.

Green tea is one of the world’s most consumed drinks, second only to water and coffee.  It is believed to have anti-obesity and anti-inflammatory effects, and it may also be an effective anti-diabetic agent. The main bioactive anti-oxidant component in green tea is a catechin known as epigallocatechin-3-gallate (EGCG). There have been some conflicting studies as to whether EGCG is helpful to those with diabetes. However, a 2015 study concluded that regular consumption of green tea was helpful in type 2 diabetes.

Likewise, a 2017 study of pregnant women with gestational diabetes (diabetes during pregnancy), showed women given EGCG from green tea had improved outcomes compared to those given a placebo substance. An additional 2017 study in Nutricion Hospitalaria showed that 12 weeks of supplementation with green tea extract was helpful in reducing both body fat and body weight in people involved in the study—weight loss can ultimately reduce one’s risk for diabetes. Two to three cups of green tea per day, or possibly consuming EGCG in a supplement form, could be beneficial.

Previous Article
Nutritional Yeast: Is the Vegan Substitute Worth the Hype?
Next Article
Decoding the Signs Your Skin is Giving You

15 Ways to Stay Healthy When Traveling with Diabetes

Living with diabetes requires many lifestyle changes. In order to maintain healthy glucose levels, it is important that people with this condition exercise regularly and eat a balanced diet rich in vegetable and fruits among other lifestyle changes.

The Best 9 Supplements and Herbs for Managing Menopause Symptoms

Too many type 2 diabetics are taking drugs when simple diet and lifestyle changes may be just as effective The statistics on the growing epidemic of type 2 diabetes are staggering—it is now estimated that one-half of all American adults will develop the disease by 2020. Currently, one out of every five United States federal health care dollars is spent treating people with diabetes. The average yearly health care costs for a person without diabetes is $2,560; for a person with diabetes, that figure soars to $11,744. Much of that increase is related to the costs of drugs.