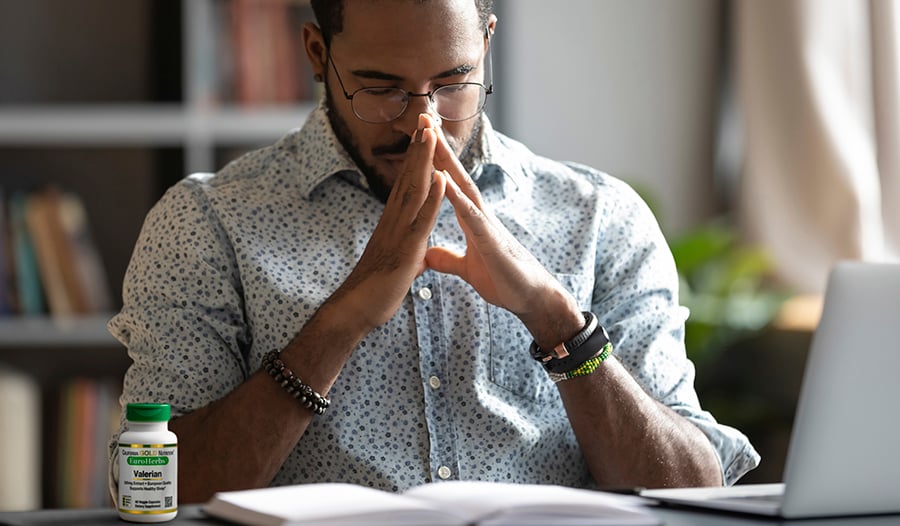 Stress and anxiety problems remain incredibly common. The World Health Organization estimates that around 264 million individuals worldwide suffer from a diagnosable anxiety disorder. Unfortunately, the numbers appear to be growing with a 14.9% increase worldwide between 2005 and 2015.

While different theories exist, worry and anxiety are generally considered to be thought-based problems. When a fearful situation confronts some people, rather than experiencing and processing the fear, they attempt to think of potential solutions in their head.

This internal dialogue helps reduce the acute sense of fear but often blocks its resolution. By having a continuing internal dialogue — worrying about the situation — the fear does not get fully processed and lingers on. Over time, this worry-based approach to stress causes an anxious person to think repeatedly about the future and stressful events that may or may not ever come to pass.

It appears likely that early childhood stress and fear sets the stage for increased worry and anxiety as an adult. Any treatment approach for anxiety should attempt to understand and address the underlying thought processes combined with treatments to help relax and calm the mind and body.

Through exercises focused on staying present and accepting current situations, mindfulness can help decrease worry and anxiety. Mindfulness meditation exercises can often be a part of a comprehensive approach to stress and anxiety management.

While anxiety often gets attributed only to problematic thought patterns, other biochemical factors are easily overlooked. In fact, suboptimal nutrition has been implicated in aspects of both depression and anxiety.

Nutrients relevant to anxiety include:

Magnesium levels correlate with anxiety states. I’ve often described magnesium as a relaxation mineral since it is required for muscle relaxation. Stress also seems to increase the need for the mineral. Unfortunately, the current quality of evidence remains low, but overall, the published research suggests that supplemental magnesium helps decrease anxiety levels and stress.

Zinc is a vital nutrient that plays a role in numerous processes throughout the body, including immune function. And like magnesium, zinc is also found to be commonly deficient. Some estimates suggest that almost half the world’s population remains at risk for zinc deficiency. Similar to magnesium, standard serum tests of zinc are also not effective for identifying all cases of deficiency.

Poor zinc status has been linked to both depression and anxiety. And research has shown that supplemental zinc in animals helps decrease anxiety. In a study on children, serum zinc levels increased through supplementation correlated with improvements in anxiety and depression. Although the research on zinc and depression is stronger, the available research still suggests that zinc may help reduce anxiety.

Iron represents a key mineral for energy production throughout the body. Hemoglobin, an iron-containing protein, carries oxygen to cells to produce energy. When deficient, symptoms of low energy and depression are common. However, iron also appears to play a less well-known role in anxiety. Children with a history of iron deficiency struggle with more behavioral problems later in life, including depression and anxiety. A study in adults found that iron deficiency increased risks for psychiatric disorders, including anxiety by one-and-a-half times. Researchers also found that treating these iron deficiencies reduced the incidence of mental health problems.

Iron deficiency remains incredibly common and often undiagnosed. Around 2% of adult men and between 10 and 20% of adult women have a deficiency of the mineral. If you suspect a deficiency, you need testing before supplementation, since both too little and too much iron remain problematic.

Arginine’s effects are a little less direct. Nitric oxide is a signaling molecule produced from arginine. While often associated with blood pressure, nitric oxide also plays a role in regulating stress hormone responses. Arginine's effects on stress hormones may be why it helps with anxiety and stress.

Initial studies in animals have shown decreased anxiety and stress hormones in stressful situations with lysine and arginine. In humans with low lysine, supplementing the amino acid reduces anxiety. A small study in humans with high anxiety showed improved stress responses with supplementation of lysine and arginine. A larger study in Japan showed efficacy in reducing mental stress and anxiety with a combination of amino acids.

Several natural herbs have also been shown to have benefits for reducing anxiety.

Passionflower represents an herb with a long history of safe use for helping with stress and anxiety. And more recently, the research supports these effects. Many of the latest clinical trials compared passionflower to standard medications for acute anxiety related to surgical or dental procedures. Generally, passionflower worked as well as medication. An earlier clinical study used passionflower for treating generalized anxiety and also found the herb to be effective.

Ashwagandha is a revered herb from ayurvedic medicine. Generally considered a tonic for improving vitality, ashwagandha also shows potential for mental health conditions. A recent trial of ashwagandha with standard medication for generalized anxiety disorder found the combination treatment to be safe and effective for improving anxiety better than medication alone. Other clinical trials have also reported success in reducing anxiety and stress with ashwagandha, likely through its effects on reducing stress hormones.

Ginkgo is a tree from Asia often described as a living fossil since trees related to modern varieties grew over 250 million years ago. While generally considered a tonic for improving memory, recent research has also started to uncover other mental health benefits. In older patients suffering from cognitive decline, ginkgo was shown to improve cognitive performance and anxiety. A separate study on dementia patients also found benefits for cognition, anxiety, irritability, depression, and sleep.

Yet, benefits seem to extend beyond elderly patients with cognitive problems. Exploring potential benefits for anxiety in general, a trial on over 100 younger patients with anxiety disorders also found significant benefits with ginkgo. The extract is typically well-tolerated.

Valerian root has an unmistakably bad smell, reminiscent of sweaty gym socks. And while the herb smells bad, it may have some potential for helping anxiety. Admittedly, the studies remain somewhat mixed, although clinical trials have shown benefits for treating depression and anxiety when combined with St. John’s wort. Similar to passionflower, it has also been shown to help with anxiety around medical procedures.

The herb appears to be safe and well-tolerated, although a couple of extremely rare cases of liver toxicity have been associated with its use. Considering the popularity of the herb, if it does have liver risks associated with it, they are quite rare. Due to an overabundance of caution, I don’t use valerian in patients with liver disease.

Anxiety and stress remain common and often cause significant challenges for people in their day-to-day lives. Based on the latest research, implementing mindfulness practices, treating nutritional deficiencies, and using herbal treatments may be a feasible approach to help reduce and treat anxiety conditions.

Previous Article
Which Herbs Interact with Medications? Here's What You (and Your Doctor) Need to Know
Next Article
5 Health Benefits and Uses of Moringa Tea

Why Stress Support Supplements Are Getting More Popular

Research indicates that specific vitamins, minerals, herbs, and amino acids may be beneficial in reducing the effects of stress on the body. Here's why stress support supplements are getting more popular.

Practicing mindfulness helps us to be present and may reduce stress. Some supplements to support mindfulness include L-theanine, Ashwagandha, GABA, and more.

Ashwagandha is an adaptogenic herb known for its stress relieving benefits. It may also help with brain function, muscle mass, thyroid problems and reproductive health.