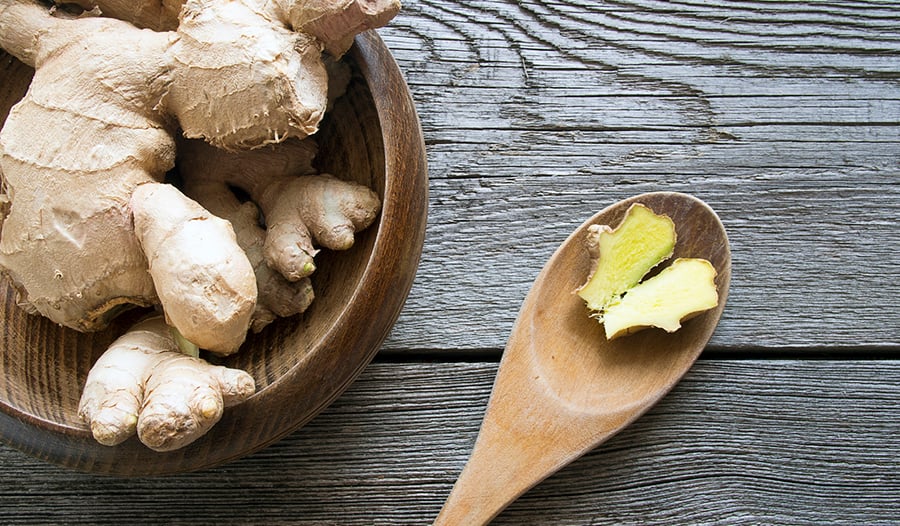 Excessive menstrual bleeding, or menorrhagia, is a common female complaint that may be entirely prevented by a simple herbal prescription – capsules of ginger. The chief cause of functional menorrhagia (i.e., not caused by the presence of uterine fibroids or endometriosis) involves abnormalities in the biochemical processes of the endometrium (the lining of the uterus).

One abnormality commonly found is an alteration in arachidonic acid metabolism. This fatty acid is derived from meat and dairy sources and is converted to hormone-like compounds known as prostaglandins. The endometrium of women who have menorrhagia concentrates arachidonic acid to a much greater extent than normal. The increased arachidonic acid release during menstruation results in increased production of prostaglandin E2 (PGE2), which not only leads to excessive bleeding but also menstrual cramps.

Historically, the majority of complaints for which ginger (Zingiber officinale) was used concerned the gastrointestinal system as well as pain and inflammation. Ginger is generally regarded as an excellent carminative (a substance that promotes the elimination of intestinal gas) and intestinal spasmolytic (a substance that relaxes and soothes the intestinal tract). Several double-blind studies have shown ginger to yield positive results in a variety of gastrointestinal issues, especially those related to nausea and vomiting.

In regards to pain and inflammation, numerous clinical studies have supported this use with positive results in various forms of arthritis, chronic low back pain, muscle pain, and painful menstruation.

Ginger has been shown to produce equal results in reducing migraine headaches as the drug sumatriptan (Imitrex), but without the side effects like nausea, dizziness, drowsiness, muscle weakness, heart attacks and seizures.

Ginger has shown to produce profound effects on prostaglandin metabolism including reducing PGE2, the prostaglandin implicated in excessive menstrual blood loss and menstrual cramps (dysmenorrhea). This effect suggests a potential use in heavy menstrual bleeding.

In order to assess the effects of ginger on heavy menstrual bleeding (HMB), 92 young women aged 15–18 years were enrolled in a double-blind study. These young women met the following criteria:

The women took either a 250 mg of dried ginger capsule or a placebo capsules three times daily starting from the day before menstrual bleeding until the third day of menstrual period (for four consecutive days). The women were then followed for three additional consecutive menstrual cycles.

Results were determined by having the women assess blood loss through a Pictorial Blood Assessment chart with the following scoring system:

The researchers concluded, “ginger may be considered as an effective therapeutic option for HMB.”

There are a couple of other important considerations in menorrhagia. The first issue is iron deficiency. With increased menstrual blood loss, many women with menorrhagia will experience low iron levels. Interestingly, low iron levels can also cause menorrhagia creating a positive feedback loop. Therefore, in any woman with menorrhagia, it is important to rule out low iron stores by getting a blood test for serum ferritin (an iron-binding protein that reflects total body iron stores). Iron supplementation is indicated in any woman with a serum ferritin below 60 ng/ml.

Next, as menorrhagia is associated with increased arachidonic acid availability in the uterine lining, it makes sense to decrease the intake of animal products and increase the intake of omega-3 fatty acids and other beneficial oils. Consuming higher intakes of fish, nuts, and seeds and supplementing with fish oils may yield beneficial effects by reducing the tissue levels of arachidonic acid. A dosage of fish oils to provide 1,000 to 3,000 mg of EPA+DHA is recommended.

This article was written by Dr. Michael Murray, iHerb's Chief Scientific Advisor. For over three decades, Dr. Murray has been a thought leader, author, and expert in nutrition, dietary supplements, and natural products. He has published more than 30 books, including the bestselling Encyclopedia of Natural Medicine, now in its fifth edition, which has been used by over 100,000 health care professionals across the globe. Learn more about him on DoctorMurray.com or his iHerb Page.

Have You Heard of Passionflower? 5 Surprising Health Benefits

1 Views
Discover the health benefits of passionflower. It has many medicinal properties from calming the mind to improving gut health.

3,657 Views
The latest research suggests eucalyptus essential oil may be helpful for respiratory problems, as an antimicrobial, and as an insect repellent.

2,538 Views
Lion's mane mushroom has gained popularity in recent years as a medicinal mushroom for brain performance and neurological health.